C# - The basis of a unit testing framework

So really on the base level (cutting out assertions and such) you need to somehow figure out which methods in which classes should be run by your tester. In managed languages this becomes a lot simpler through the use of reflection. We can simply ‘reflect’ on each of the classes/methods and decide if they should be run or not.

This simple idea can then be added onto in a load of different ways. For example some methods are expected to throw certain exceptions. The TestMethod attribute could therefore be modified to allow that exception through. The unit tester itself could then be adapted to catch that exception and still pass.

In a recent post I showed how it is possible to write all your C# code indirectly through reflection. Here is the same example in Java. The process itself is very much the same - retrieve meta information about the classes/methods we are interested in and then invoke them passing in the object it would normally be called from. The classes themselves are all very similar through C# to Java. Type becomes Class, MethodInfo becomes Method etc.

A more interesting difference is how the Java version uses variable length parameters in the .invoke calls on Method objects as a way of passing parameters to the particular method. In the C# version you have to explicitly pass a Type or object array. I think the Java version is slightly more user friendly in that quite small regard even though the actual parameter itself is an array in both circumstances.

Its also interesting to see just how many exceptions the Java version can throw in the process. Because they are all checked you are forced to deal with them whereas C# does not have this feature. Its probably likely then that you would have to catch a more generic exception in the C# version.

Here is the code for the Java version. The result is the same as the C# version.

Here is the C# version.

The source code for my Java swing Snippet Manager application is now on GitHub. 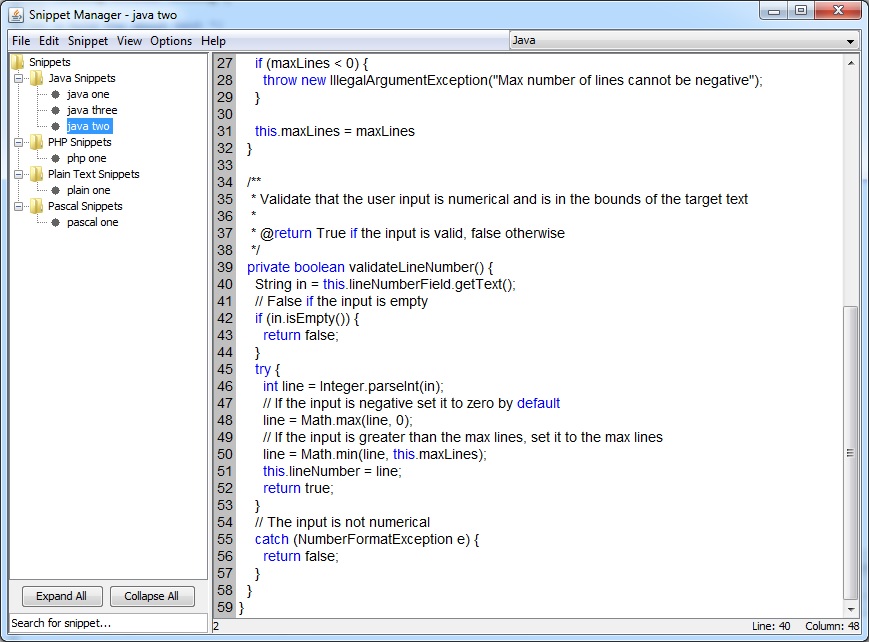 You can use the reflection features in C# to write your normal code in an indirect manner. No idea why you would want to do something like this, but it gives an idea of the control you get when using reflection.

In this example we have a small class wrapping two integers inside their own properties. First of all an object is created, the properties set, and the .ToString() method result passed into a Console.WriteLine using the conventional way. The exact same thing happens again but now indirectly through the use of reflection. As you can see it takes up nearly three times more code to to the exact same thing using reflection but you at least get the same result.

Here is a Java version of the same example

The full source code for my numerical methods helper is now available on the GitHub repository.

Numerical Methods Helper is a learning tool for numerical algorithms in AS and A2 Mathematics modules. The program supports methods of numerical integration, root finding through iteration, local extrema, and tangents and normal lines to functions.

The progress of each algorithm is drawn onto a freely movable and interactive graph to allow students the most engaging learning experience. All parameters for each algorithm are completely customisable, and the results and graphs will be re drawn to accommodate the new values.

Not only does Numerical Methods Helper give a final result to an algorithm, but it also gives the calculations needed for students to get the final answer for themselves. For example, all integration algorithms are accompanied with list of ordinates used in the algorithm, along with a final formula that can be typed into any calculator to yield the final same final result.

Functions for use in any of the algorithms can be freely customised and changed using a number of built operators including trigonometry and logarithms. Not only can the program be used for the tuition of numerical methods, but the graphs can also be utilised for other topics such as transformations of graphs. 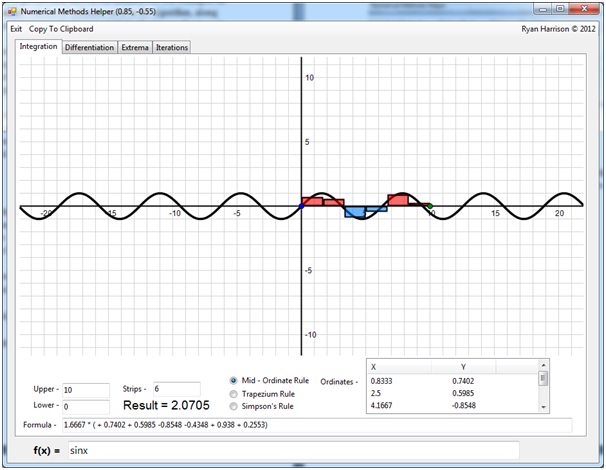 This screenshot shows the integration tab of the program. The user is able to enter a custom function along with the upper and lower bounds of the integration, the numerical algorithm to use and the number of iterations. The results are then shown to the user, with a formula of the chosen algorithm and the ordinates used. Te application of the algorithm to the equation is also shown graphically on an interactive plotting view.

For more information about the application, download the User Manual along with the executable from GitHub or as a zip file.