Today I decided to take the step and upgrade from Visual Studio 2012 Professional to Visual Studio 2012 Premium so that I could take advantage of some of the language updates in .Net 4.5 and also be able to produce applications for the Windows Store. It also seemed like a good move as I can now get the software for free with the MSDNAA (Dreamspark Premium) account from my university.

I would have done it sooner but I knew it would probably be a long and laborious process trying to uninstall every element of my previous Visual Studio 2010 to then install the newer versions for 2012. I was not wrong. I really wish Microsoft would provide a good uninstaller for Visual Studio. At the moment the main uninstaller gets rid of just the main application, not any of the other stuff that it installs with it. You therefore have to manually go through your control panel trying to find things that may have been installed from VS 2010 - which takes a long time considering that Windows uninstallers are not the quickest of things at the best of times.

When I was finally able to get rid of just about everything, the installation process for Visual Studio 2012 went through without a hitch (the same for which could not be said for 2010). The installer itself was also very nicely designed and seemed to me at least faster than for VS 2010.

Here are a few screenshots - 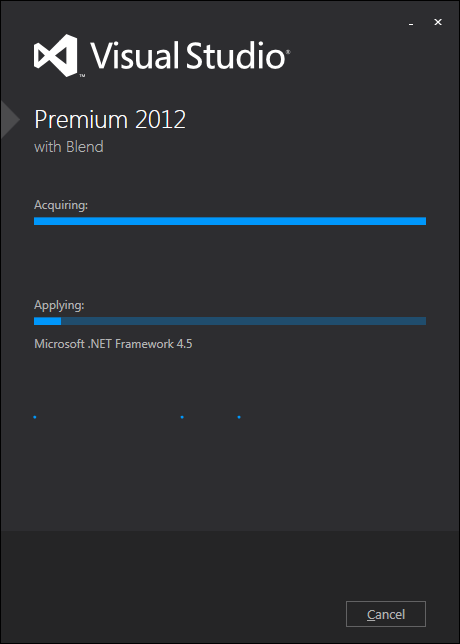 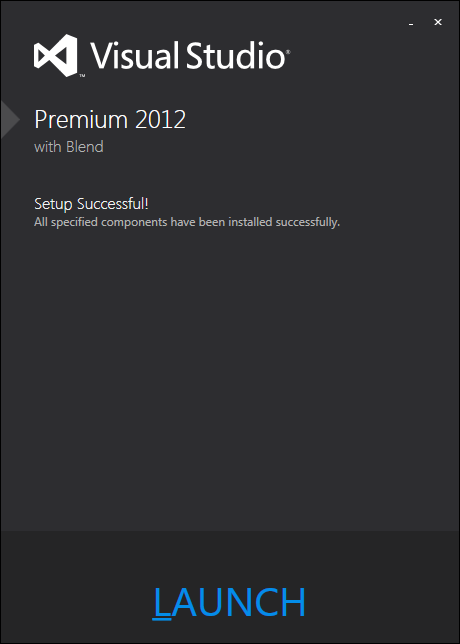 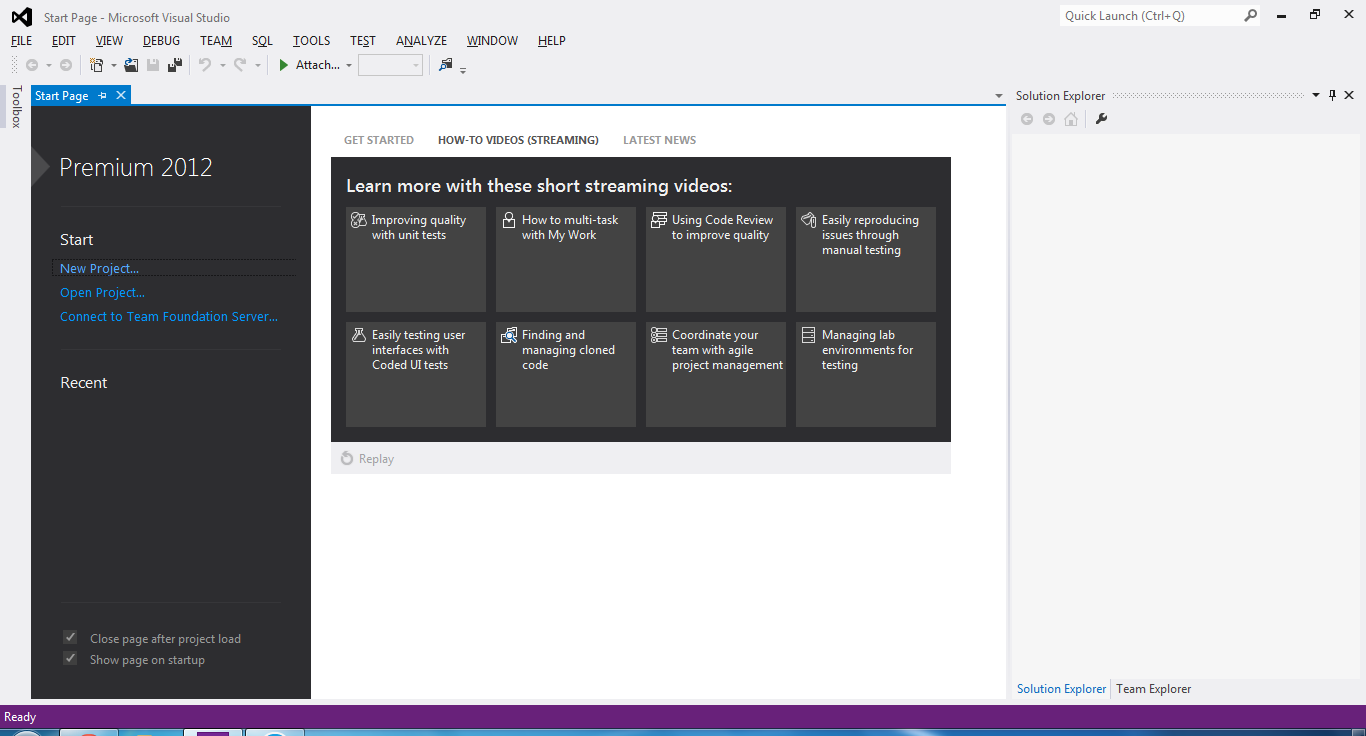 I really like the look and feel of the new styled interface so far. However I may have to try and figure out a way of reverting back to the old non-capitalised versions of the menu items.

Upon my recent post on my transferral from SVN to Git, I’ve now signed myself for a GitHub account.

I’m now in the process of uploading some previous projects up to GitHub for safe keeping which no doubt will prove helpful at some point.

Additionally this will enable me to simply link to a repository on GitHub instead of hosting project zip files here on this blog. This will no doubt make it much easier to give updates on any new changes to the code.

Recently Ive taken the time to learn the Git version control system. Upon previously using SVN for version control, Git seems to be a lot more powerful and user friendly. But perhaps one of the best reasons to use Git is the wealth of choice in online repository services using Git compared to that of SVN.

One of the best and most popular is github.com which provides unlimited public git repositories for free. Not bad at all.

So far my experience with Git has been very positive. Much easier branching/merging than SVN and the online documentation and support is very good. It has provoked me into making the switch from SVN to Git, or moving on with the times as many would say. Well see how it goes.

I’m also going sign up for a GitHub account. Can’t go wrong with unlimited free repositories. Hopefully it will get me into the habit of pushing everything up to online repositories which no doubt will save me one day when I accidentally delete something important.

A beta version of Visual Studio 11 has been released alongside the beta of .NET 4.5.

In Visual Studio 11 the whole interface has been transformed to a monochrome effect that is a lot more pleasing to the eye for long periods than previous versions which barraged the user with layers of colourful and distracting icons. 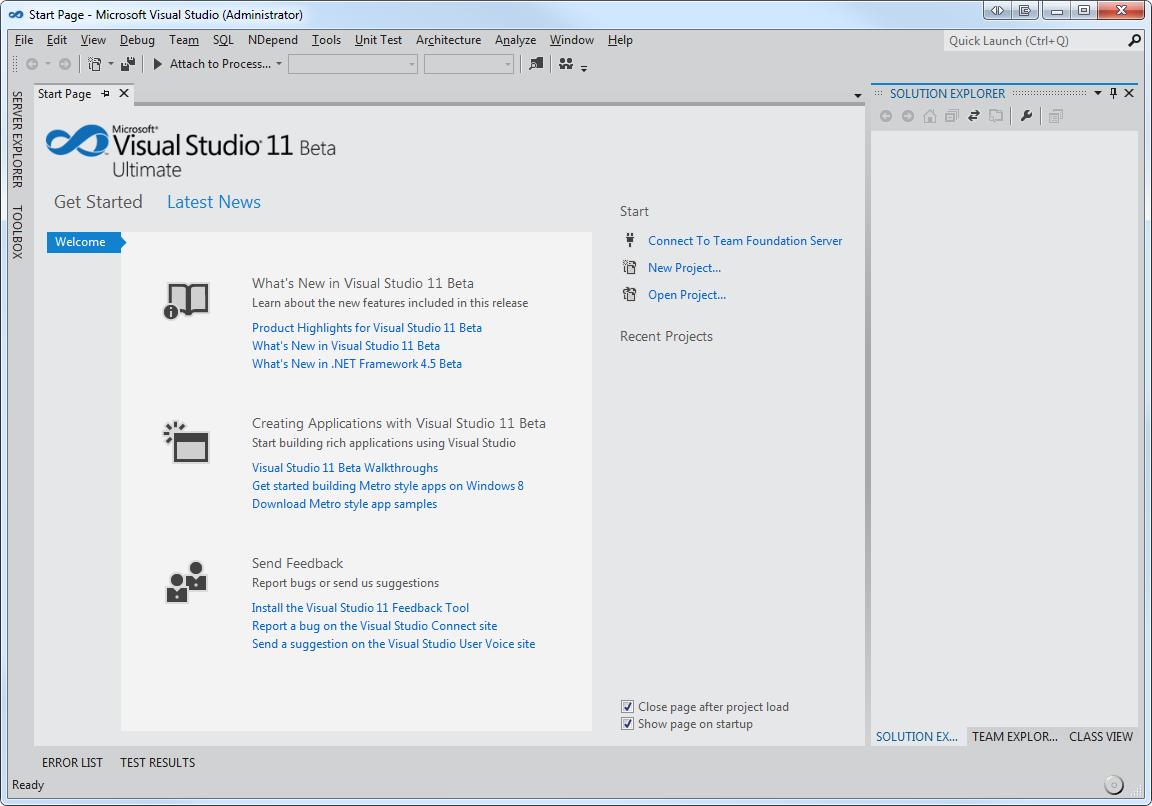 With the code view open, the main focus is rightly where it should be - on the code. Nothing else is stealing your attention. 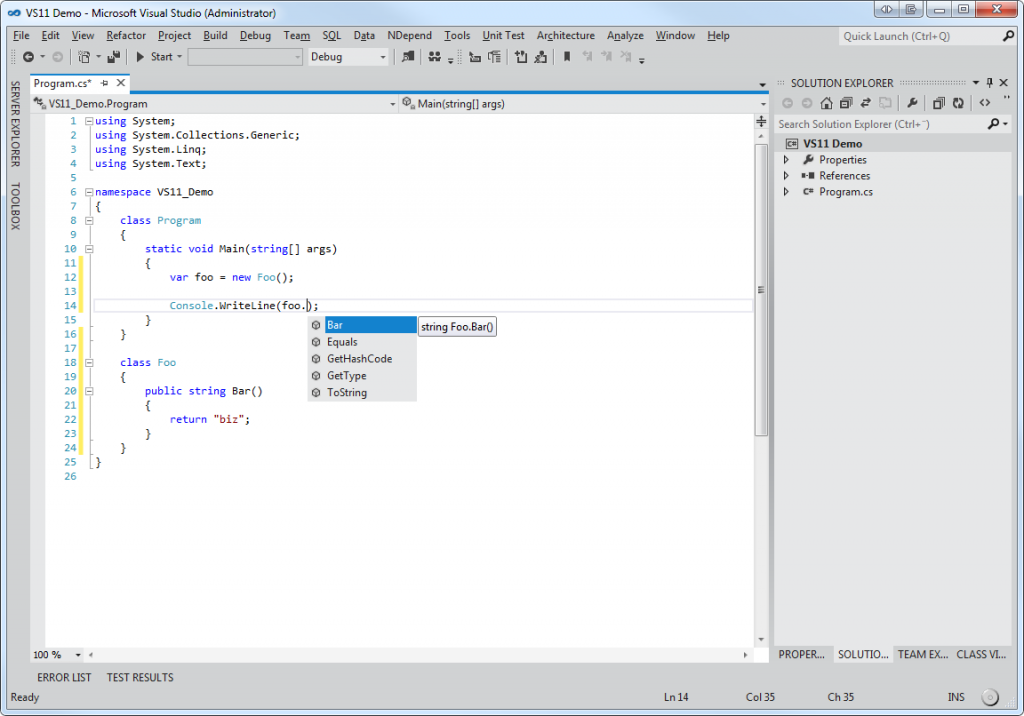 Some of the new features including Hubs, Pivots and multi - instancing are explained in the Visual Studio Blog.

Finally the long awaited Consumer Preview of Windows 8 has now been made available for download. ISO images of both 32 and 64 bit versions can be downloaded from the links below. Also remember that this build of Windows 8 is not a final product and as such may have bugs or other quirks that can cause the system to crash or applications to hang.

First impressions of the release point to some styling inconsistencies and annoyances with the new interface. One user encountered three different scrollbar styles and found the lack of a Start Menu compared to the new ‘Charm’ menu frustrating. Whilst others find it very difficult to efficiently multi task as they have to constantly enter and exit the Metro UI by putting the mouse at the bottom or top of the screen. Of course many others like the new Metro interface which seems to work very well on touch based computers. On the other hand such a drastic change could be alienating traditional desktop and laptop users who do not have access to a touchscreen and therefore cannot make the most of the new Metro UI.