I recently got a link to a Facebook app which challenges you to how many times you can click a button in 30 seconds. After a couple of tries I got to around 180, yet I thought that I must be able to do better by making the computer click for me.

After a bit of research I came across two functions from MSDN named SendInput and mouse_event, both of which are provided in the Win32 API, and allow you to programatically simulate both mouse clicks and keyboard input. Thus I thought it was a great opportunity to try out C#’s p/invoke feature which allows the programmer to ‘import’ unmanaged functions from DLL libraries and use them in a C# application.

In this example I will only be using the mouse_event function, however an implementation of SendInput is included in the sources files, which are available for download at the bottom of this post.

We can now call this unmanaged function as we would any other method already in our project. However to make good use of them, we need to find out a bit more information on each of the parameters.

They can be summed up as follows -

Before we finally call this method, it is a good idea to declare some constants, each describing which mouse button we would like to press. Details can again be found on the relevant MSDN page -

Finally we can now call the function, which will be wrapped into two methods -

As you can see we actually need to call the function twice, once for the mouse down action, and again for the mouse up action, to simulate a full mouse click. In this example we only use the dwFlags parameter and pass zero for the rest as we have no need for them.

So we now have two methods that we can use to simulate a mouse click, yet no way of letting the user determine where to click, how many times to click, and what mouse button to click - the perfect chance to create a C# Windows Forms Application (a.ka. GUI) to make our program a little more presentable.

In my program, I have created a simple User Interface containing a list view, a few buttons, and a couple of textboxes, which will allow the user to specify a queue of points to click in sequence, as well as the ability to insert additional information for each click (button to press, time in between, etc). 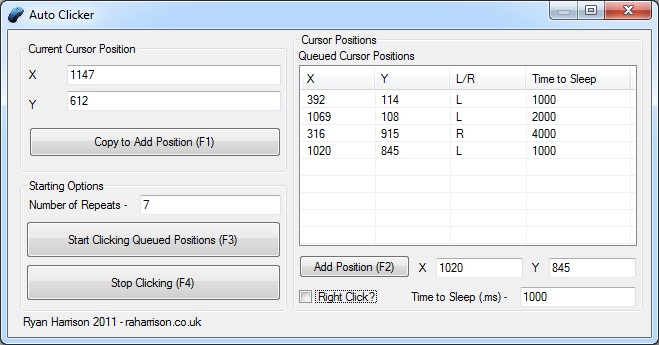 The meat of the application happens in two methods. The first is the StartClickingButton_Click event handler, where a new thread is created to handle the mouse clicks so that the main form does not become completely unresponsive when the program is clicking every couple of milliseconds.

In this method a few List collections are made to to store each portion of data about each click in the queue in a parallel manner. The corresponding information is added to each collection before they are passed into a new ClickThreadHelper object which will handle the mouse clicking. Next, a new thread is created and the Run method inside the ClickThreadHelper object is assigned to it. Finally, the thread is started, leaving all the work to Run method -

This method is the only place where the two imported functions are called, and simply iterates over each of the collections already passed by the StartClickingButton_Click event handler. In each case the current position of the cursor is changed before the method decides on which mouse button to press. Finally the Thread is ‘put to sleep’ by the .Sleep() method of the Thread class by the allotted time given by the user - which results in a pause between each queued click. The rest of the program mainly consists of error checking user input, along with allowing the ability to stop the thread at any time and use keyboard shortcuts to set cursor coordinates.

In my short tests I was able to accomplish 368,521 clicks on the same Facebook app, although it should be noted that it is is possible to gain much higher scores when the timer on the app sometimes freezes completely when clicking every few milliseconds In this program, only the left and right mouse buttons can be clicked, however the middle mouse button and mouse wheel can be manipulated much in the same manner by changing the constants used in the functions.

Full commented source code along with an executable is available for download HERE. This includes example code on how to use the SendInput function, which requires the use of two small custom structs that essentially provide much of the same information as before.

MSDN links to the Win32 functions -

Pages on the two custom structures for the SendInput function