As a follow up to my previous post where we found the maximum sum subsequence of a one dimensional array, in this post the idea will be extended to cover 2d arrays or grids of numbers. 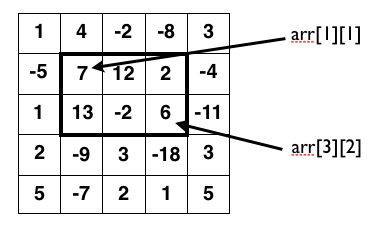 Here is the algorithm. Note that this is massively inefficient with an order of O(n^6) - meaning that if we double the input size, the time taken calculate the result will increase by a factor of 64 (2^6).

Which generates the output -